Covid-19: What you need to know today

October is festive season in India, but there’s one more reason to celebrate this year — the end of the first wave of the coronavirus disease.

It’s evident in one of the charts accompanying this 176th installment of Dispatch — a return of the seven-day average of daily cases to levels last seen in early September.

The reasons for this are not clear, and the pattern of daily case numbers is still a bit too volatile for my liking, but the downslope of the curve is clearly there to see. Inadequate testing doesn’t seem to have caused this — the seven-day average of tests conducted every day has continued to rise — although a closer analysis of the break-up between RT-PCR and rapid antigen tests is needed before this can be conclusively said.

This is the first time that the number of cases of Covid-19 — both daily and seven-day average — has declined consistently for at least a fortnight, perhaps more. Other countries have seen clear first waves (the US has also seen a second, and is now on its third), but, until now, not India. In late August and September, as cases climbed, a few experts erroneously referred to it as the second wave in the country, but as evident from the chart referred to in the first instance, it was merely a continuation of the same upward curve. That has changed — since the third week of September, the seven-day average of daily cases has been on a downtrend. And this, even after accounting for the Monday factor (the number of cases typically sees a dip on account of low testing over the weekend). On October 5, it was 59,980; on September 28, 69,685; on September 21, 74,693; on September 14, 81,801; on September 7, it was 77,816; on August 31, 67,484; and on August 24, 59,051. The pattern is clear. 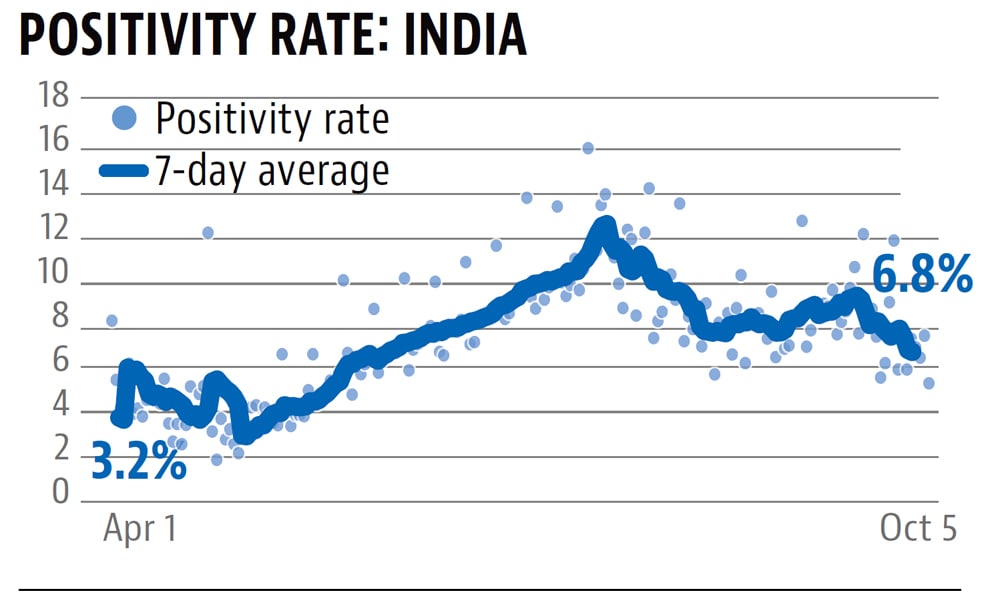 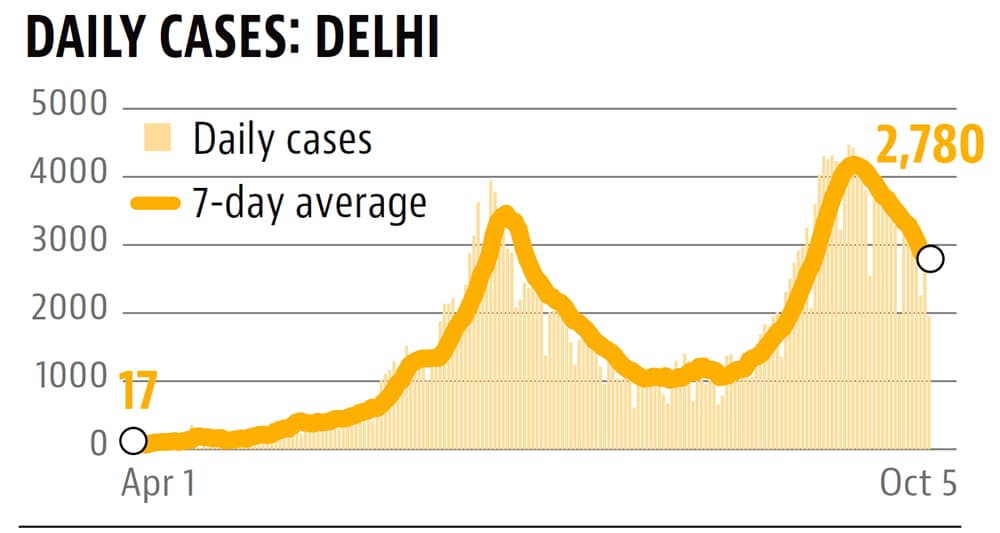 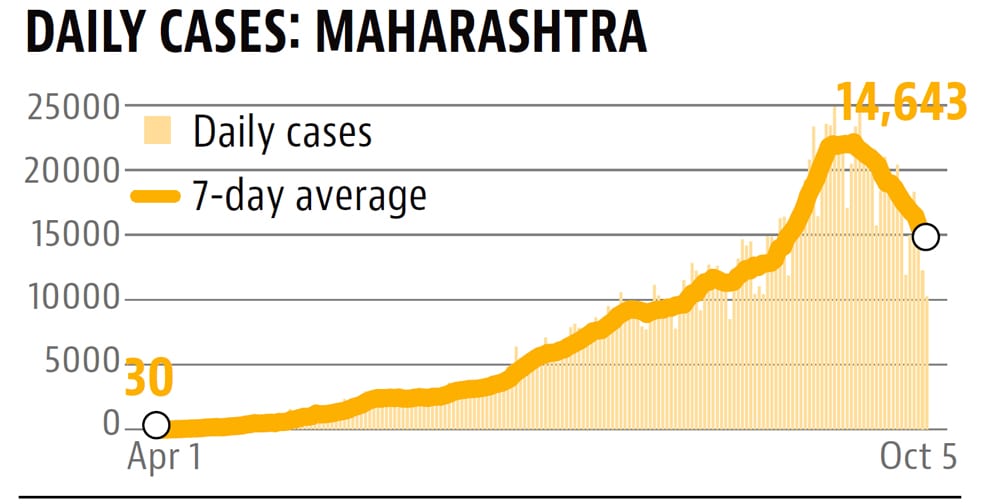 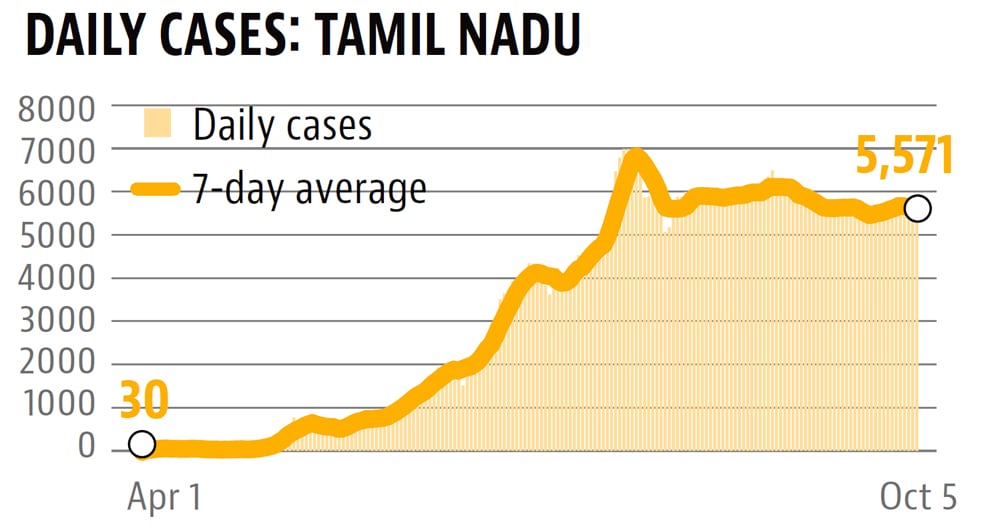 And so, to repeat what I said at the beginning of this column, it is time to celebrate — cautiously, in a social-distanced way, and with the complete awareness that the curve could go north again, and things south. After all, in both the US and in European countries such as France and Spain, the second wave was stronger than the first in terms of number of daily cases, although the deaths were far fewer.

For much of the first wave, Delhi, Maharashtra and Tamil Nadu accounted for a significant proportion of the infections in the country, although that’s changed in the past few months.

Among these, the trajectory of the pandemic in Delhi shows that the Capital has actually seen two waves and that in Maharashtra shows that the western state, the worst hit by the coronavirus disease in the country, may be seeing the end of its first wave. Maharashtra’s positivity rate is still a bit too high (a seven-day average of 18.7% on Monday) to say this with certainty, but even that number is at least eight percentage points off its recent peaks indicating some sort of turnaround.

Tamil Nadu presents an interesting study though. The number of cases in the state has been on a long (and high) plateau since early August — it isn’t clear why — although its positivity rate seems well under control. The testing in both Delhi and Maharashtra appears to have dropped off a bit, while Tamil Nadu continues to remain a (positive) outlier.

Also In the News

A counterinsurgency police officer and three Lashkar-e-Taiba (LeT) militants including a commander were killed in an overnight encounter in Srinagar that ended Sun...

News updates from Hindustan Times: 5,475 fresh cases push Delhi’s Covid tally to over 551,000 and all the latest news

Here are today’s top news, analysis and opinion. Know all about the latest news and other news updates from Hindustan Times.Delhi’s daily Covid toll continues ...

The Metropolitan Magistrate court, Andheri on Thursday recorded the statement of lyricist Javed Akhtar in connection with his the complaint of defamation against a...

‘China can’t get the better of India in conflict scenario’: Air force chief

China can’t get the better of India in any conflict and the air force, with its capability and intent serving as a deterrent for the adversary, is ready to handl...

Researchers at Microsoft revealed that major internet browsers like Google Chrome, Firefox, Microsoft Edge and Yandex are hit by a massive malware campaign. “The malware is de...

Seven Bharatiya Janata Party (BJP) leaders from Jammu have tested positive for coronavirus disease (Covid-19) in the past five days even though the party’s headq...